You are using an outdated browser. Please upgrade your browser to improve your experience 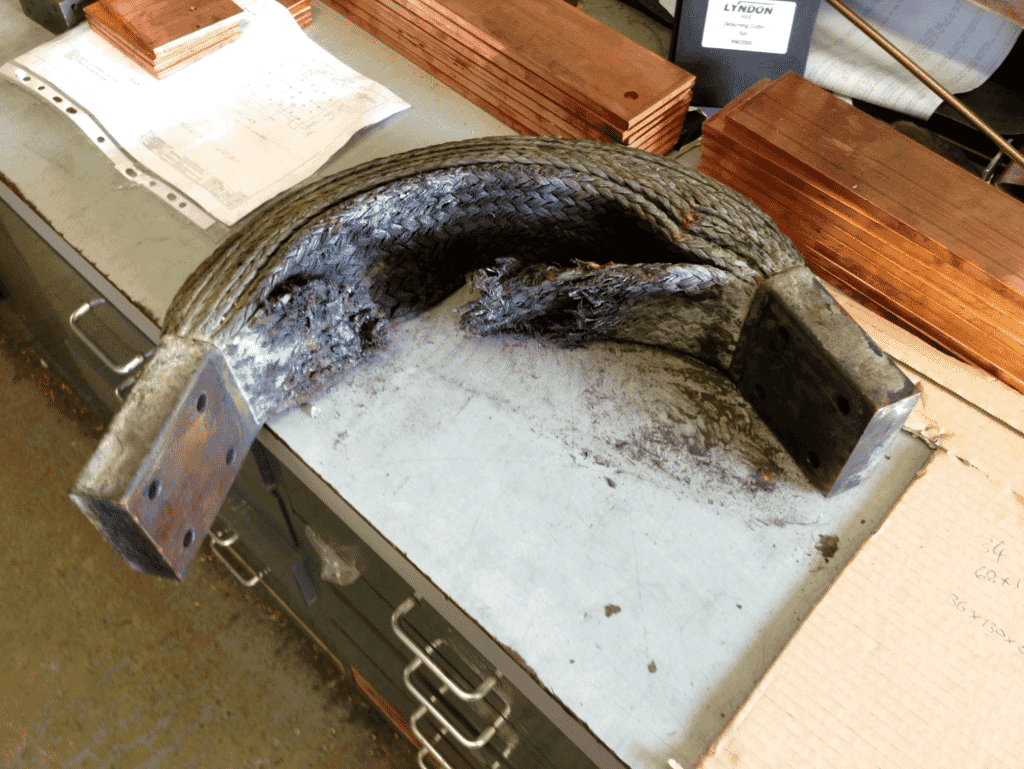 For each value of n the coefficients  w k satisfy the CSE:

With (U = N), the CSE suggests w ≈ 0 with k ≈ 0  to give an inexorably linear temperature rise from near-zero exponent.

Strictly, the situation at critical current  ( U = N = Uc ) invalidates the solutions applied for ( U ≠ N), but the linear offset in the proper solution fits neatly with solutions where ( U ≈ N ). Taking this onward, again with minimal spatial variation and k~0, then a positive value for ( U – N ) gives a positive exponent w t and the temperature diverges strongly. Fig 03, above, has already shown this type of exponential temperature trajectory. The concept of an equilibrium temperature is no longer valid but, for U ≫ N, (103) shows that the offset temperature Te is given by Te ≊ Tz.

In any case where ( U > N ), the CSE does reveal possible imaginary values for k which bring undulate spatial temperature distributions to (106) above. This now suggests exploration of complex values for both w and k as a response to imposed conditions

Undulate temperature conditions can be readily visualized by re-writing the CSE in the form:

Whilst  U, N, D, relate to defined physical parameters and remain both real and positive, w k are exponential coefficients which may be real, imaginary or complex. The value of the spatial coefficient, k, can hence be pictured in an Argand diagram as a complex number derived from w’/D  with the square root of the modulus and half the argument. In 105 & 106 the formulae for temperature, temporal and spatial coefficients w and k provide real and imaginary contributions to the exponent. The sign and magnitude of the real components indicate rates of heat flux which determine whether the functions grow or shrink over time and distance. The imaginary contributions represent wave behaviour as combinations of temporal oscillation and spatial undulation. 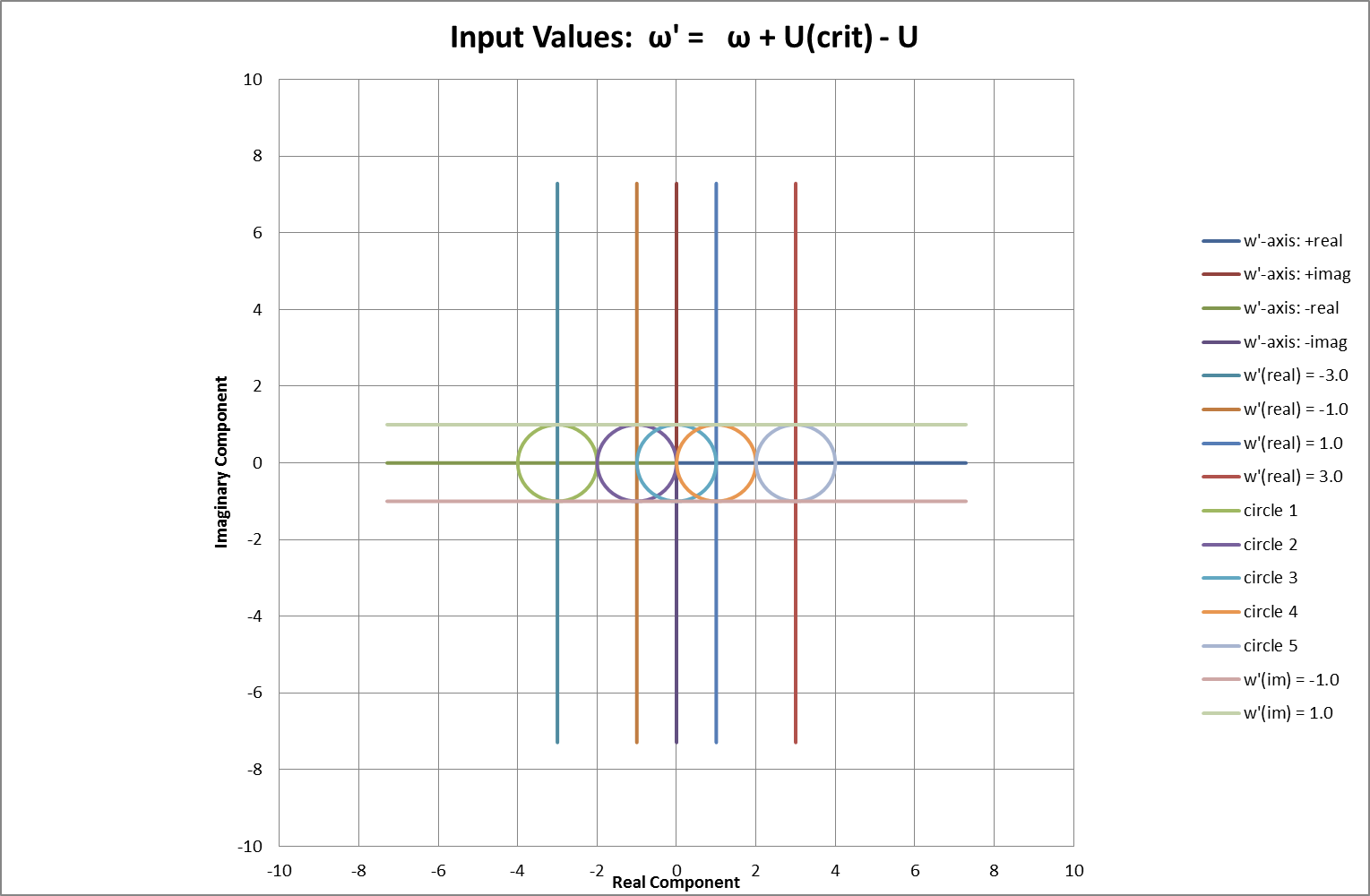 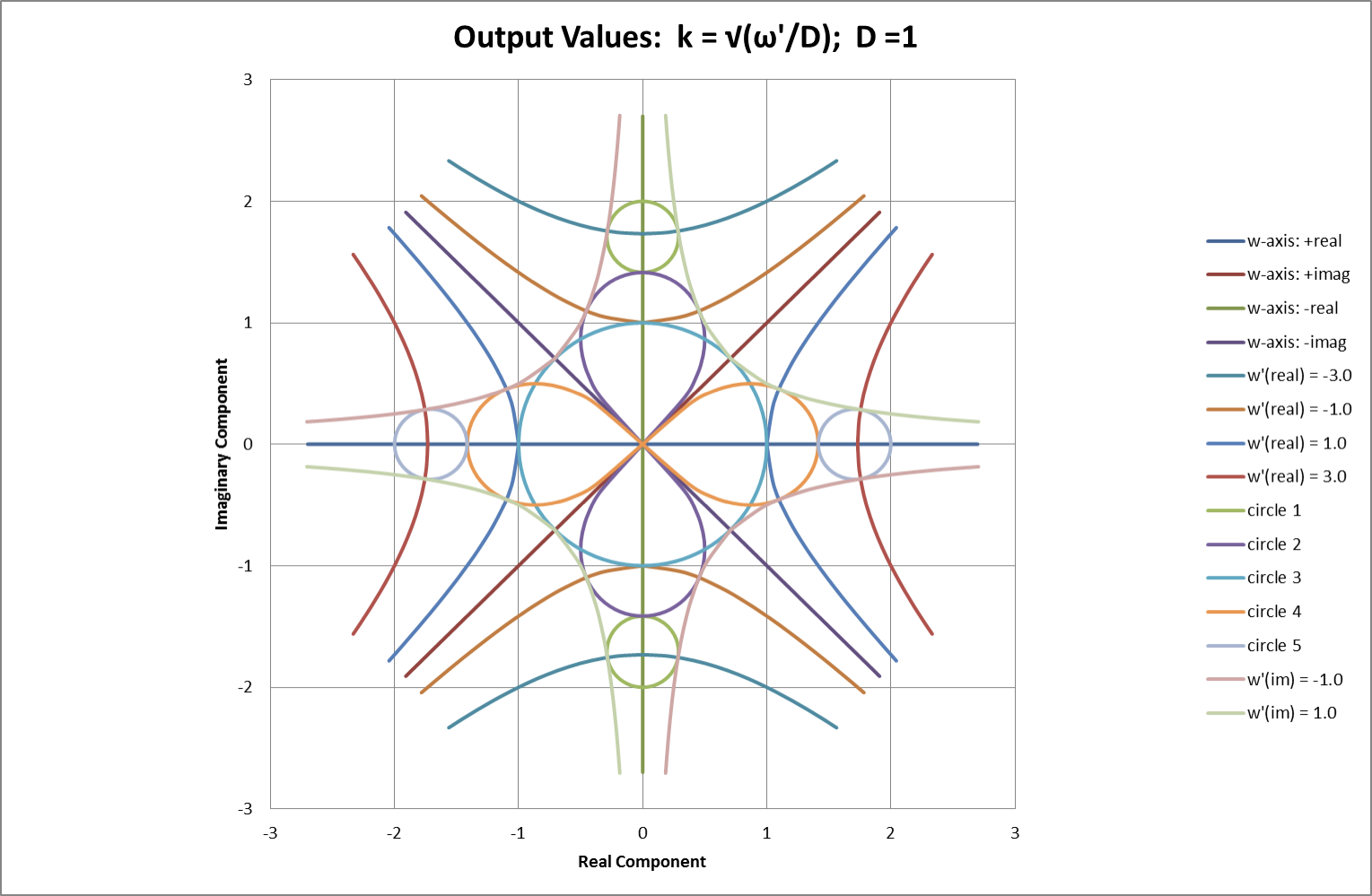 Figs 07 & 08 show corresponding Argand diagrams for w’ and k. Coloured lines represent points of constant real or constant imaginary value in Fig 07. Corresponding coloured pairs of hyperbolae represent the  +ve & -ve square root values of the same points in Fig 08. As a direct result of halving the argument in obtaining a square root, real and imaginary axes in the Fig 07 appear twice, at π/4 separation, in Fig 08. Vertical lines in the   plane represent constant current (strictly, constant U derived from the square of current). Horizontal lines represent a constant temporal oscillation frequency, f = wimag/2π. 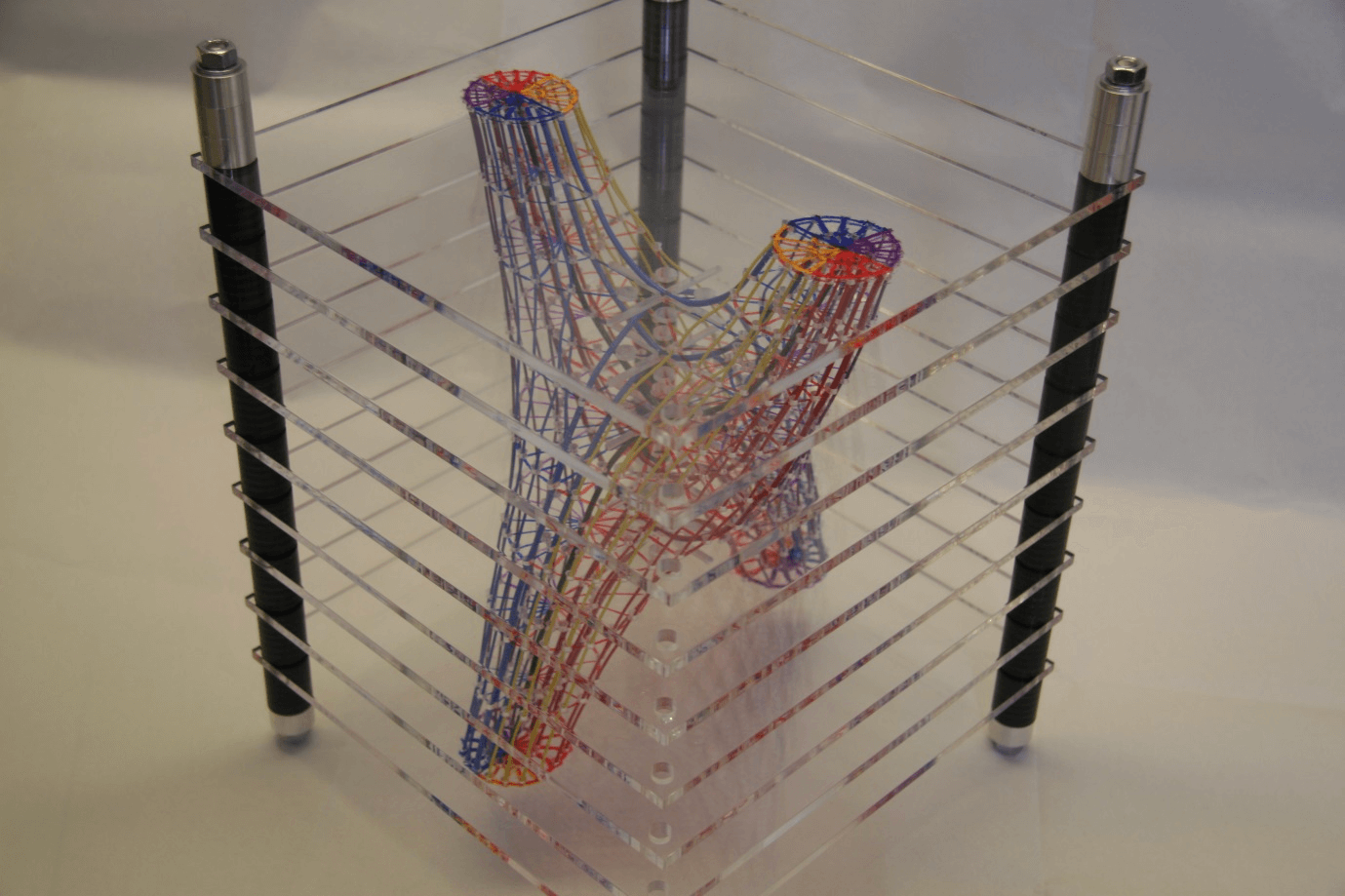 Fig 08 corresponds to looking directly downward onto the wire-frame model shown in Fig 09 but adds the axes transferred from Fig 07. Starting with circles representing variations in complex frequency, w, the model shows corresponding values of complex wavenumber, k , at various values of the rate-parameter, ( Uc – U ), principally determined by current. The plane of real axes in the above model runs from negative at the front LH centres to positive at the back-RH centres of each plane. Similarly, the plane of imaginary axes runs from front right to back left.

The intersecting parabolae, corresponding to w = Dk2 + (U – N), are also visible within the structure of the model. Their central intersection, where U = Uc, corresponds to a break-over from real to imaginary values for k. On either side of the critical current this same break-over is offset by a spatial undulation according to the basic form of the CSE, here re-written as:

A zero value for ω represents the break-over point in its transit from the negative values giving temporal stability to the instability arising from positive values. Spatial undulation, with wavelength λ, has a wave-number given by:

The condition w = 0 now gives a break-over value U = Uλ for undulation of a given wavelength:

Using the values for u & D defined in (103) above, this enables a wavelength-dependent “cross-over current”, uλ, to be evaluated as:

When transferred to the FEA model described later in the text, this formula accurately predicts the threshold value of current producing stability in an undulate temperature distribution. Currents below the threshold level, uλ , allow the distribution to disperse whilst higher currents feed into the undulation, causing it to be amplified. The inverse-square dependence on wavelength provides a filtering effect that dissipates shorter wavelengths more rapidly owing to their higher “cross-over currents”. Referring back to 106, initial boundary conditions may comprise a temperature profile built up with a Fourier spectrum of undulation components. An example in the FEA results below shows how subsequent filtering can bias the spectrum toward the lower spatial frequencies.

The complex planes and wire-frame model of Figs 07, 08 & 09 also show the range of possible phase relationships between the complex arguments for k and w. These are an important determinant of sustainable forms for undulation and oscillation. Careful inspection shows that co-incident non-zero wholly imaginary values for k and w are not possible. This precludes any possibility of “pure” travelling waves. The diagram shows that pure spatial undulation, without dispersion, only occurs when the imaginary component of w is zero. Lines of constant  w’real  in Fig 07 show that imposed temporal oscillations, represented by variations in  w’real , push the spatial undulation coefficient k shown in Fig 08 towards an asymptote of equal wavenumber and spatial attenuation rate (c.95% attenuation in one half-wavelength) represented by:

This prediction for forced oscillation is also in good quantitative agreement with the results of simulations in the FEA model that are described later.

Both formulae 303 & 305 above, plus the CSE, relate real values of measurable physical quantities (current, wavelength, resistivity etc.) by direct use of complex or imaginary values for the exponential coefficients  w  and k . Using complex numbers therefore provides a simple method to provide both variation and continuity in the linkage between dispersive and undulate behaviour.

LML Products is the most trusted supplier of busbar, cable, connector & earth bar in the UK. We’re ready to talk about your project.

We use cookies on our website to give you the most relevant experience by remembering your preferences and repeat visits. By clicking “Accept”, you consent to the use of ALL the cookies. However you may visit Cookie Settings to provide a controlled consent.
Cookie settingsACCEPT
Manage consent

This website uses cookies to improve your experience while you navigate through the website. Out of these cookies, the cookies that are categorized as necessary are stored on your browser as they are essential for the working of basic functionalities of the website. We also use third-party cookies that help us analyze and understand how you use this website. These cookies will be stored in your browser only with your consent. You also have the option to opt-out of these cookies. But opting out of some of these cookies may have an effect on your browsing experience.
Necessary Always Enabled
Necessary cookies are absolutely essential for the website to function properly. These cookies ensure basic functionalities and security features of the website, anonymously.
Functional
Functional cookies help to perform certain functionalities like sharing the content of the website on social media platforms, collect feedbacks, and other third-party features.
Performance
Performance cookies are used to understand and analyze the key performance indexes of the website which helps in delivering a better user experience for the visitors.
Analytics
Analytical cookies are used to understand how visitors interact with the website. These cookies help provide information on metrics the number of visitors, bounce rate, traffic source, etc.
Advertisement
Advertisement cookies are used to provide visitors with relevant ads and marketing campaigns. These cookies track visitors across websites and collect information to provide customized ads.
Others
Other uncategorized cookies are those that are being analyzed and have not been classified into a category as yet.
Save & Accept
Powered by